BLOG: My injury and Irish Open…

Again I have left it some time since I have been writing a blog. Normally I don’t have an excuse at all for leaving such long periods but I think this time I have reasons for such a delay. There has been a lot of things going on in my world since just after Norwegian Open where I pulled out due to my ankle injury. Obviously I had a period of just physical work because I couldn’t do any on court training for nearly 10 days. This was of course not the best preparation for the Irish Open but again there was nothing I could do.

Well it has been 1 month since i wrote my last blog. A lot has been happening in the last month. I will start with French Open. Last year I lost first round of qualification to the Swedish number one Henri Hurskainen. This year I was straight into the main draw and I played Brice Leverdez from France. I have played Brice quite a few times as we have been training together quite a lot in the past. The last time Brice and I met was in Dutch Open a few years ago and Brice won in 2 sets. Brice had been playing well making 2 finals over the summer in Canada Open and US Open so I new this game was going to tough. I also new that this was his home court and there is always a lot of supporters in the stadium.

Hey everyone, This was my 3rd time playing in the main draw of Denmark Open Super Series. This time i was up against another Indian called Kashyap. I had never played him before but i had played a number of other Indians in the past couple of weeks and most of them have the same style of play, some just better than others. Kashyap just won a bronze medal at the recent Commonwealth Games beating his team match Chetan Anand to get 3rd place.

Hey, I had a good week this week here in Holland. I have not played this tournament for a few years but the last time I played I lost in the 3rd round to Eric Pang in 3 sets. I remembered the hall quite well and remembered that I liked to play there. That gave me a bit of confidence once I entered the hall on Tuesday evening to have a hit before playing my first match Wednesday mid-day.

On Wednesday evening after I came back from my late night match I decided to have a cold bath. I sometimes do it as I feel it helps my legs to recover. I got back to my room at 12 o'clock Wednesday night and turned on the bath and switched the tap to as cold as it would go and went into the bedroom to stretch some more before getting into the bath. 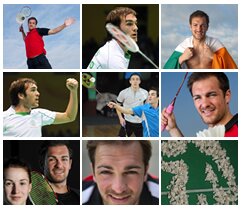